MDS Teams Place One and Two in ESDC Hackathon

During this competition, UBC and SFU student teams of programmers and data analysts were tasked to solve a real-world challenge and present their solutions to ESDC employees. A total 14 teams made of 3-5 members competed (seven from UBC and seven from SFU).

The seven teams from UBC featured students from all three MDS programs (MDS Vancouver, MDS Okanagan and MDS Computational Linguistics). As well, several MDS alumni were on-hand during the weekend as mentors.

The hackathon tasked the participants to harness the power of publicly available data to detect business fraud. The objective of the hackathon was to: 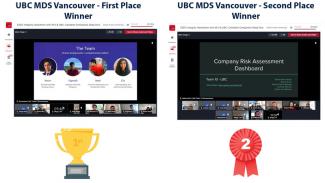 Each team were given 10 minutes (with a five-minute Q&A) to present their idea to a panel of judges from SFU, UBC and ESDC. Among the UBC judges were several MDS alumni.

Four out of the seven MDS teams cracked the top 6 and two made the top 3! The top 3 had 10 minutes (with a five-minute Q&A) to present again to the full panel of judges. By the end of the weekend, our MDS teams placed first and second! We congratulate Neel Phaterpekar, Kevin Shahnazari, Ela Bandari and Vignesh Rajakumar for placing first.

We talked to the first-place team about their win and asked what made them decide to enter the ESDC Hackathon, what was their strategy and how the MDS program contributed to their win.

“Our instructor, Tom Beuzen, mentioned that it was a worthwhile learning opportunity. We were all feeling excited to put some of the skills we have been gaining into practice,” said Ela Bandari on why they decided to enter the ESDC Hackathon.

When it came time to strategy, it was all about building on each team members strengths and divided the tasks based on areas they knew each could deliver on.

“We started on Friday with a lot of discussion,” said Neel Phaterpekar, “we really wanted to cement a vision for the project. That’s where we came up with the idea of creating two products. From there, our workflow fell into place as our skill sets drew us to where we were best able to contribute.”

When it came to MDS courses the team applied to the hackathon, they used several techniques learned from a variety of courses. For example, they set-up a Postgres SQL database (DSCI 513), a Plotly Dash Dashboard (DSCI 532) and attempted to use PCA and tSNE for dimensionality reduction (DSCI 563). The team also found the Data Visualization II (DSCI 532) course instrumental in helping them build an interactive dashboard.

As well, with the MDS program being online this year, the team noted that this proved helpful on how the team worked well together.

"Since our whole program was online, we’d gotten used to working in groups over Zoom. When we work in a remote team, we had to take into consideration team members’ time zones and respect their need to step away from their screen. These things were almost second nature to us by the time we started the hackathon,” said Vignesh Rajakumar.

The team described the weekend as a continuous Zoom call where they would check-in with each other and discuss any problems they were having.

“Definitely everyone played their part and seeing each other working really hard motivated the whole team to push through the challenge,” Kevin Shahnazari said.

Despite the long hours, stress and sleep deprivation, the team had a lot of fun.

“Overall, it was quite satisfying to work so seamlessly together as a team and build a functioning product in a weekend,” said Bandari.

Vanessa Ho is the Marketing Coordinator for the MDS program. She holds a Bachelor of Journalism degree from the University of Regina.